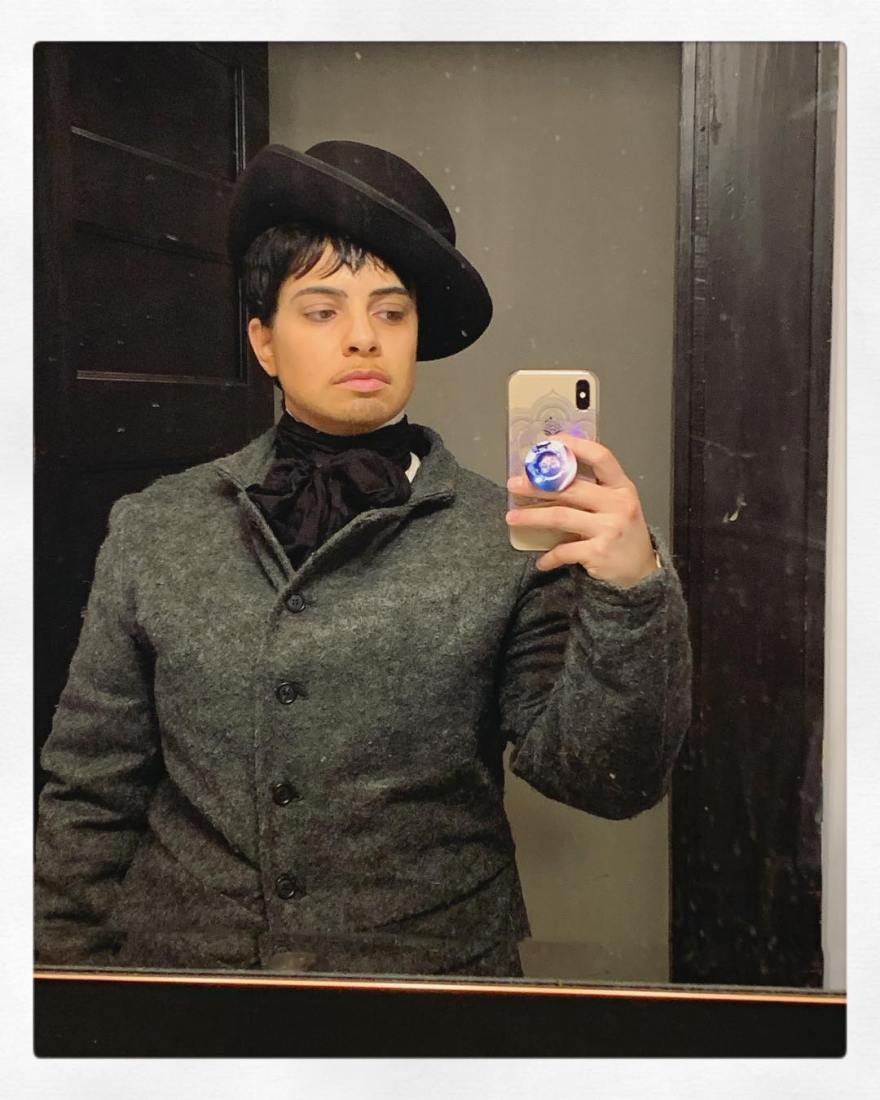 “Why did you pick a man’s monologue?”

John Gorrie, one of my teachers at BADA, asked me after I performed a monologue from King Lear.

I thought for a moment, but I’m no bard. I couldn’t put into words a good answer. My entire life of memories, wants, thoughts, and desires exploded into my brain all at once in that moment.  My heart knew exactly why I had chosen a man’s speech, but I just didn’t have the words or the time to create them.

Ever since I can remember, I’ve never liked the frills and the lace of “femininity”. I did girl scouts. Brownies, or whatever. You know what we did? Nothing. We ate candy in a half-lit church. I watched while the other girls chatted and giggled. My brother did boy scouts. Guess what they did. Cool shit. They went camping. They got to do archery. They learned survival and played in the woods. My mum was one of the leaders, so I got to tag along to boy scouts and watch.

I can remember countless times when my mum forced me into some kind of floofy dress for church or Christmas. It was usually Easter. She’d buy me a special white or pastel dress to wear to church. And now that I’m grown and understand that all things are finite (including money spent on dresses for little girls and time with parents), I wish I could have appreciated her gestures more.

But I just never enjoyed it. I wanted to wear pants and run around shirtless like the boys.

Just as often as I was forced into dresses, I was with my dad doing “boy” stuff. I picked up snakes, played in rivers, shot guns, and told dirty jokes. As a “tomboy”, I got to have fun, be loud, be brave, get mad, get even…

When I look at Edmund’s monologue, I see my own existence. Though I am a legitimate child of my parents, I’m as underestimated as Shakespeare’s character.

Thou, nature, art my goddess; to thy law
My services are bound. Wherefore should I
Stand in the plague of custom, and permit
The curiosity of nations to deprive me,
For that I am some twelve or fourteen moon-shines
Lag of a brother? Why bastard? wherefore base?
When my dimensions are as well compact,
My mind as generous, and my shape as true,
As honest madam’s issue? Why brand they us
With base? with baseness? bastardy? base, base?
Who, in the lusty stealth of nature, take
More composition and fierce quality
Than doth, within a dull, stale, tired bed,
Go to the creating a whole tribe of fops,
Got ‘tween asleep and wake? Well, then,
Legitimate Edgar, I must have your land:
Our father’s love is to the bastard Edmund
As to the legitimate: fine word,–legitimate!
Well, my legitimate, if this letter speed,
And my invention thrive, Edmund the base
Shall top the legitimate. I grow; I prosper:
Now, gods, stand up for bastards!

Why am I less? I am just as smart and fit as any man. But for some reason, I’m not included. Only because society says I’m less than men. But nature? Nature, she’s the one who made me. People mock me. They call me ugly, bitchy, rude… But my nature is natural, and my nature is fierce. That fierceness, their cruelty, and the need for acceptance breed spite-fuelled ambition.

That fierce (vaulting?) ambition has led me to the stage. Since middle school, I wanted to be on Jackie Chan’s stunt team. I started martial arts classes. I choreographed fights at school. A friend and I recreated a fight from Rush Hour one summer. Then I found out that girls don’t get to fight in the movies like Jackie Chan, Chris Tucker, and Brad Allen. So I tried my hand at acting instead. I sucked, but I’m determined. Determined to prove to myself and everyone else that I’m more than anyone expected.

I’m so thankful for theatre. In the theatre, I get to do those things I’ve always wanted. I’ve fought with hands, guns, and swords. No ladders or umbrellas yet, but I’m not giving up hope. Thanks to theatre, I’ve become melancholy noble, the trickster, the quarrelsome best friend… I’ve done things in theatre that shouldn’t be possible. I’ve done men’s things…

I guess, Mr. Gorrie, I chose a man’s monologue, because I fecking can. Because I want to. Because it speaks to me.

Maybe one day I’ll get to play the romantic lead.

Until then, I’m more than happy playing men.